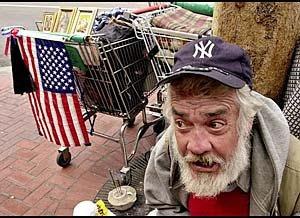 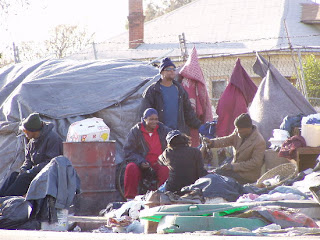 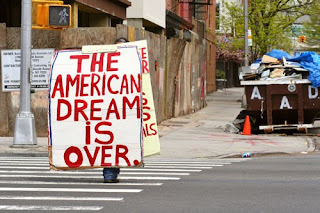 I live in Columbus, OH. Please let me know the parks where these people are. I will get you more photos and those guys feelings...

Otherwise, please stop fooling around other people. Do not write all your expectations. Hope you never seen real america yet

NEW YORK, Oct 17 (IPS) - With a massive spike in the number of foreclosures and evictions over the past two years, communities throughout the U.S. have witnessed the sprouting of tent cities -- many of them home to once middle-class citizens fallen victim to the economic downturn.

Encampments have formed in or near large urban areas including Reno, Los Angeles, Chattanooga, Columbus, St. Petersburg, Seattle and Portland.

"[Starting] about four years ago, there has been an outbreak of tent cities popping up across the country. Today, we observe a slow but steady increase in homeless people," Michael Stoops, acting executive director of the National Coalition for the Homeless (NCFTH), told IPS.

According to a report by NCFTH, almost 61 percent of local and state homeless coalitions say that they have seen a growth in homelessness since the foreclosure crisis -- now at 10,000 homes per week -- began in 2007.

The phenomenon is similar to the social upheavals of the Great Depression of the 1930s -- an era frequently referenced these days -- when "Hooverville" ad-hoc shanty towns, some as big as 15,000 people, were erected around the country, named after the president at the time, Herbert Hoover.

Scott, a resident of the tent city in Los Angeles, told a television reporter, "I had one of those escalating, finance-charge, balloon-things that steps up every year and the payment just got too much so that I couldn't afford it anymore. I tried to work with the bank and they worked with me, gave me some extra time, but it's just getting too big. So they foreclosed."

Many residents of tent cities share Scott's fate. One woman told BBC that she used to live in a three-bedroom, two-bathroom house. When her husband fell ill, it became impossible to make ends meet.

"We have a lot of grandkids, too. They used to always come over and stay. They don't come here anymore, I don't want them to come here. We go there and see them at their house," she said. She and her husband now live in a mobile home at a camp.

Most tent cities have a community-spirit and are self-regulated, said Stoops, who has visited many of the encampments. "In most tent cities, there are certain rules -- like for instance no drugs, no alcohol and no violence," he told IPS.

He and his organisation supported the formation of tent cities. "[They] are of course not the solution, but necessary until adequate shelters and housing are found," he added.

"The tent city in St. Petersburg, Florida, is even supported by the government and some local, non-profit organisations provide support for tent cities across the country," Stoops said.

Jeremy Rosen, executive director of the National Policy and Advocacy Council on Homelessness (NPACH), expected a mild growth in the number of tent cities in the future due to the weak economy. "On the other hand, I suspect we'll see a definite rise in homelessness," he told IPS.

According to a document published by NPACH, the U.S. Department of Housing and Urban Development's (HUD) definition of homelessness "does not include children and families who have lost their homes but are temporarily staying in motels or with other people because other shelter is not available or appropriate."

These families have often lost their homes due to an event like eviction, foreclosure or a family crisis, but cannot find available and appropriate shelter.

"They become the 'hidden homeless', moving around from place to place -- sleeping in cars, on couches, sometimes in shelters, sometimes with friends and sometimes with family. Unfortunately, our country chooses to deny this reality and doesn't define many of these people as homeless," Rosen told IPS.

There are an estimated 600,000 children and youths who are considered homeless by other agencies, but not by HUD. "More than 60 percent of the homeless students identified by public schools are ineligible for HUD Homeless Assistance," the NPACH's report states.

"During the last seven years, we have seen homelessness increase. This is due to, for example, hurricanes or the unofficial economic recession with a foreclosure crisis," Stoops told IPS. "A month ago, over 900,000 homes were foreclosed and some of the people concerned will wind up homeless."

While "there exists more [government] sympathy for banks and people on Wall Street", he wryly added that "the capitalist society will allow even those people to wind up homeless."

In Chicago, Cook County Sheriff Tom Dart has taken unusual action and announced last week that he was suspending all foreclosure evictions.

"The move comes as a result of the growing number of evictions that involve renters, most of whom are dutifully paying their rent every month, only to later learn their landlord has fallen behind on mortgage payments and the building has gone into foreclosure," Spokesman Steve Patterson told IPS.

Dart wants mortgage companies to be forced to provide sufficient information to the Sheriff's Office in order to conduct an eviction.

According to a press release by the Cook County Sheriff's Office, foreclosure filings have steadily climbed in Cook County since 1999. In just two years, the number of foreclosure evictions has almost tripled.

The data firm RealtyTrac recently published a report stating that foreclosures were at an unparalleled high nationally, filings were up nearly 100 percent from a year ago and officials estimate that approximately half a million people could lose their homes as adjustable mortgage rates rise over the next two years. Many of those affected might eventually end up homeless, seeking help in a tent city or elsewhere.

As there are not nearly enough shelter beds for all the homeless people in the U.S., Stoops appealed for government compassion, saying that "every city should have one park or another space where homeless people are allowed to erect their tents."

"It is hard for homeless people to set up a homeless campsite because cops come and make them move on. The most recent count from the government, which is from 2005, says that 44 percent of the nation's homeless are unsheltered," he said.

If every one has medical insurance in U.S.A., why Obama made it as an election issue? If you have got all the facilities in the life, it doesn’t mean every one else is same as u. The person who denies the existence of poor people in US, and a cruel system which exclude them from health care, is living in his own world. Better to describe as a frog in the well.

You are absolutely right. The money is not going to the ordinary people. Every community there are so many houses are on sale... no body has money to buy. And no finance companies are going to loan you (unless you have a 20% down payment)

You have given someone else blog as reference. I asked about exact situation. I can refer your blog to lots of people....Do you know exactly whats going on here.

I live here in Columbus, OHIO. I also I am used to travel as a freelance photographer. Please let us know how did you find the truth in the refered blogger's point of view

Do you know the Thiru'Kural'

Before raise your flags please find the truth....

Otherwise I can laugh at you

Your argument is leading nowhere.

I am a member of "Indypendent Media Network", and we exchange news reports with each other. It's impossible to me, and anyone else to be everywhere.

The media organaization, IPS is the main source for this specific article about US, and I trust the authenticity of their reporting. You have to contact IPS journalists, to find out exact location in Columbus.

It seems, that you don't believe(or don't want to believe) the news. Would you ask same question to major news services such as CNN, BBC or FOX? How can you trust them? Why don't you go to Iraq and Afghanistan, to find the truth? You don't need to laugh at anyone giving false informations.

"Before raise your flags please find the truth...."

"Otherwise I can laugh at you"
(You have to judge yourself, before you point the finger on others.)

For more information, please watch the following video, which is related to this post.
வீடியோ: இதுதாண்டா அமெரிக்க சொர்க்கம்!

Your articles are realistic. Very few tell the truth about America. Well done. Keep it up.