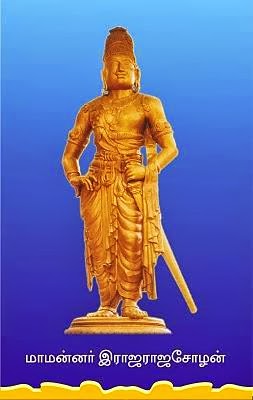 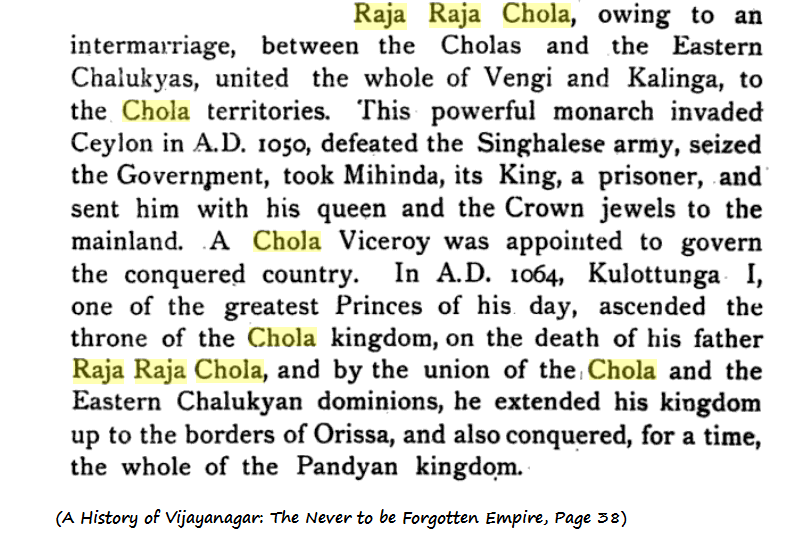 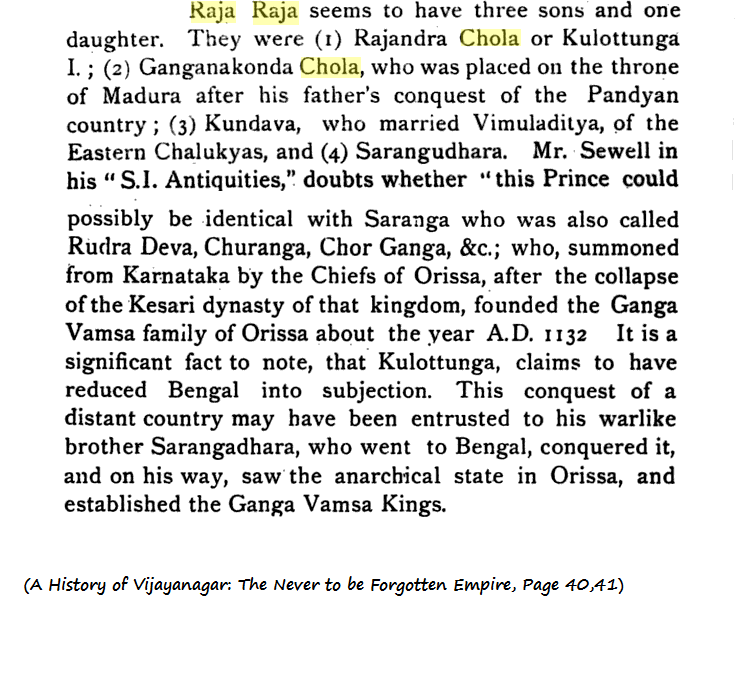 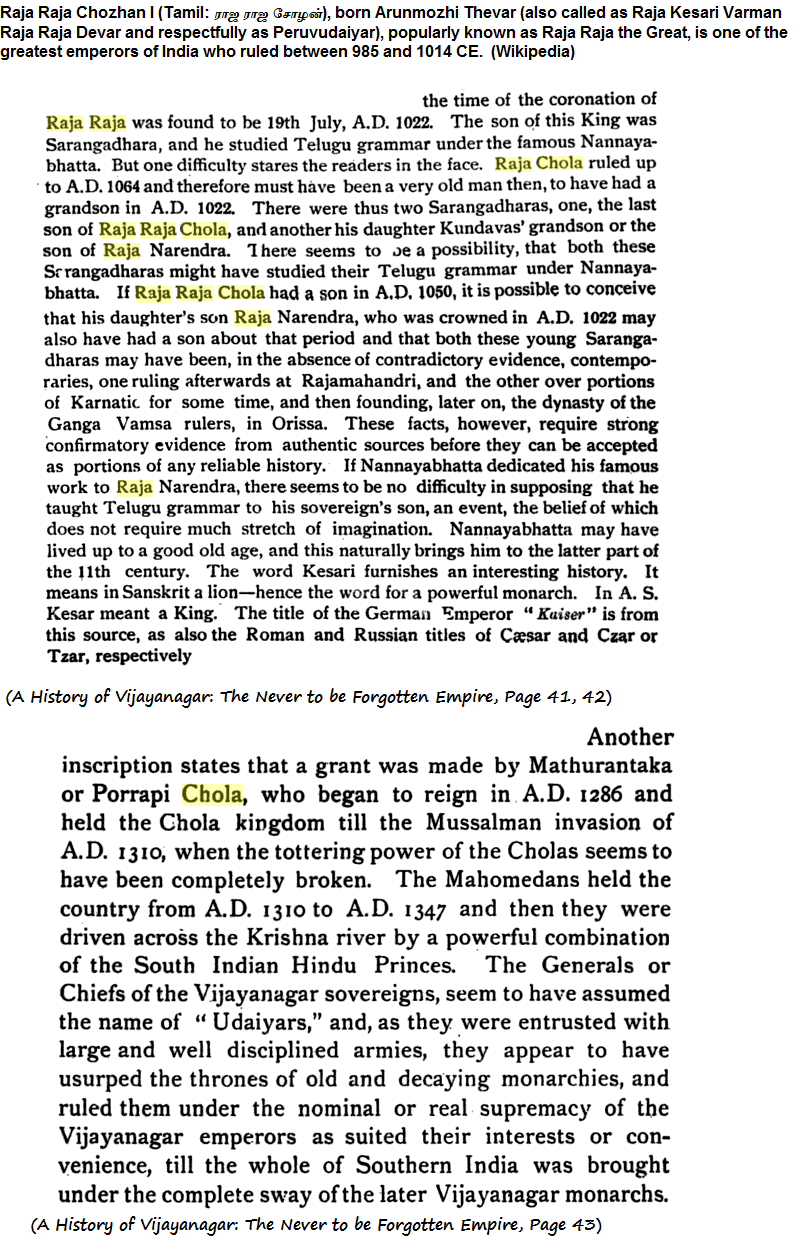 பின்னிணைப்பு 2:
Clyde Winters‎ to Dravidian, Tamil and African Historical and Cultural Studies
11 September at 06:15
(https://www.facebook.com/groups/324865121323869/permalink/473232543153792/?__xts__[0]=68.ARA_qknoAHlE8Ya4lV2Fzd-nUY-ZGX6nNPW8LABmNiZ16dVTjqm3Q8KUQ7UrsE0ZPGEhsgqyTSWATkHchUQnLl3Nr0CDU_9_yFsKuBkOyJz3fV6h5vhDrWZlMq48oYkC3UA5NQkEZVXKqX-6REZKZf2a2KvcAoug2XunLhv4buQR-YwzHgTL&__tn__=H-R)
The Chola were Telugu from Kushadvipa or Nubia

The Purana and Pali text make it clear the Chola were Kushites from Africa. The Dravidians lived in ancient Africa. It appears that the Tamil belonged to the Nhsj (Nehesy) tribes and, the Telugu and Kannada belonged to the Thnw (Tehenu) tribe. These people were called ḫЗš (Kushites) or ḫЗšt (Khasut) by the ancient Egyptians.

First mention of ḫЗšt=Kush/ Khasut, goes back to Narmer the first ruler of Egypt. Narmer was one the first ruler to expand the Kushites into the Levant and Anatolia. Narmer is attested in Egypt and Canaan. Many serekhs of Narmer have been found Tel Erani, Arad, 'En Besor, Halif Terrace/Nahal Tillah .

The main urban center in Kuša , was Kaši. Kaši (see page 2) was described as a great city in Pali and Purana text.

The inhabitants of the Fezzan were round headed Africans. (Jelinek, 1985,p.273) The cultural characteristics of the Fezzanese were analogous to C-Group culture items and the people of Ta-Seti . The C-Group people occupied the Sudan and Fezzan regions between 3700-1300 BC (Jelinek 1985).
The inhabitants of Libya were called Tmhw (Temehus). The Temehus were organized into two groups the Thnw (Tehenu) in the North and the Nhsj (Nehesy) in the South. (Diop 1986) A Tehenu personage is depicted on Amratian period pottery (Farid 1985 ,p. 84).

The Tehenu wore pointed beard, phallic-sheath and feathers on their head. The Tamil belonged to the Nhsj (Nehesy) , and the Telugu and Kannada belonged to the Tehenu Confederation.
In the Puranas and Pali text Nhšy, corresponds to Mandaean Nahas, the name for the undersorld abode of the serpent Ur, the metaphoric name for Nubia (see page 2).

A major Kushite nation and tribe were the Wawat. The Egyptian semivowels change into Sankrit /y/ or /v/. Srinivasan believes that Yayaati (/ Vayati) was the name for Wawat.

We also find in the Puranas, the a tribe named Vaša or Vaasishtha. The Vaša tribe corresponds to the Wase/ Waset tribe/nation (/w/ = /v/). Srinivasan according to Srinivasan was the name for Thebes. It was also the name for the Nehesy: Waset tribe.

The heqa khasut, "ruler(s) of the Kushites" or Hyksos/ Hykussos, were Hattians or Kashkas. in otherwords they were Kushites. This is obvious in their name khasut which corresponds to Kaska. The name heqa khasut , was first used by the Old Kingdom to refer to the Kushite Nubian chieftains. That is why the Hyksos / Hykussos expected the Kushites in Nubia to support them in their war with the Egyptians.

During the Fifth Dynasty of Egypt (2563-2423), namely during the reign of Sahure there is mention of the Tehenu people. Sahure referred to the Tehenu leader “Hati Tehenu” . These Hatiu, correspond to the Hatti speaking people of Anatolia. The Hatti/Hurrian people often referred to themselves as Kashkas or Kaskas.

Heqa Khasut also appears in the Epic Puranas as Ikshvaku < Heqa Khasut. The Ikshvaku were seen as evil. The Ikshvaku worshiped Seth.
The Nhsj (Nehesy) or C-Group people began to settle Kush around 2200 BC. The kings of Kush had their capital at Kerma, in Dongola and a sedentary center on Sai Island. The same pottery found at Kerma is also present in Libya especially the Fezzan.


The C-Group founded the Kerma dynasty of Kush. Diop (1986, p.72) noted that the "earliest substratum of the Libyan population was a black population from the south Sahara". Kerma was first inhabited in the 4th millennium BC (Bonnet 1986). By the 2nd millennium BC Kushites at Kerma were already worshippers of Amon/Amun and they used a distinctive black-and-red ware (Bonnet 1986; Winters 1985b,1991). Amon, later became a major god of the Egyptians during the 18th Dynasty.

In the ancient literature the Proto Dravidians are called Kushites. Using boats the Kushites moved down ancient waterways many now dried up, to establish new towns in Asia and Europe after 3500 BC. The Kushites remained supreme around the world until 1400 1200 BC.

Proto Saharans/Kushites expanded into Inner Asia from two primary points of dispersal : Iran and Anatolia. In Anatolia the Kushites were called Hattians and Kaska. In the 2nd millennium BC, the north and east of Anatolia was inhabited by non I E speakers.

Anatolia was divided into two lands “the land of Kanis” and the “land of Hatti”. The Hatti were related to the Kaska people who lived in the Pontic mountains.
Hattians lived in Anatolia. They worshipped Kasku and Kusuh. They were especially prominent in the Pontic mountains. Their sister nation in the Halys Basin were the Kaska tribes. The Kaska and Hattians share the same names for gods, along with personal and place names (1). The Kaska had a strong empire which was never defeated by the Hittites.

Singer (1981) has suggested that the Kaska, are remnants of the indigenous Hattian population which was forced northward by the Hittites. But at least as late as 1800 BC, Anatolia was basically settled by Hattians (2)

Anatolia was occupied by many Kushite groups,including the Kashkas and or Hatti. The Hatti , like the Dravidian speaking people were probably related . The Hatti were probably members of the Tehenu tribes.

The Tehenu was composed of various ethnic groups. One of the Tehenu tribes was identified by the Egyptians as the Hatiu or Haltiu.

During the Fifth Dynasty of Egypt (2563-2423), namely during the reign of Sahure there is mention of the Tehenu people. Sahure referred to the Tehenu leader “Hati Tehenu” .(3) These Hatiu, may correspond to the Hatti speaking people of Anatolia. The Hatti people often referred to themselves as Kashkas or Kaskas.

The Hatti controlled the city state of Kussara. Kussara was situated in southern Anatolia.
The earliest known ruler of Kussara was Pitkhanas. It was his son Anitta (c. 1790-1750 BC) who expanded the Kussara empire through much of Anatolia.

An important group in Anantolia in addition to the Hatti, were the Hurrians. The Hurrians enter Mesopotamia from the northeastern hilly area . They introduced horse-drawn war chariots to Mesopotamia .

Hurrians penetrate Mesopotamia and Syria-Palestine between 1700-1500 BC. The major Hurrian Kingdom was Mitanni , which was founded by Sudarna I (c.1550), was established at Washukanni on the Khabur River . The Hurrian capital was Urkesh, one of its earliest kings was called Tupkish.
Linguistic and historical evidence support the view that Dravidians influenced Mittanni and Lycia . (Winters 1989a) Alain Anselin is sure that Dravidian speaking peoples once inhabited the Aegean . For example Anselin (1982, pp.111-114) has discussed many Dravidian place names found in the Aegean Sea area.

Two major groups in ancient Anatolia were the Hurrians and Lycians. Although the Hurrians are considered to be Indo-European speakers, the Hurrians probably spoke a Dravidian language.
The Hurrians lived in Mittanni. Mittanni was situated on the great bend of the Upper Euphrates river. Hurrian was spoken in eastern Anatolia and North Syria .

The Elamites spoke a Mande language. The RV claimed that the father of the Hurrians or Hastuk was the Elamite King Kudur-Mubak. The Mande and Dravidian speakers usually migrated together into various parts of Eurasia.

The letters written in the unknown language were numbered 22 and 25. In 1909 Bork, in Mitteilungen der Vorderasiatische Gesellschaft, wrote a translation of the letters.

In 1930, G.W. Brown proposed that the words in letters 22 and 25 were Dravidian especially Tamil. Brown (1930), has shown that the vowels and consonants of Hurrian and Dravidian are analogous. In support of this theory Brown (1930) noted the following similarities between Dravidian and Hurrian: 1) presence of a fullness of forms employed by both languages; 2) presence of active and passive verbal forms are not distinguished; 3) presence of verbal forms that are formed by particles; 4) presence of true relative pronouns is not found in these languages; 5) both languages employ negative verbal forms; 6) identical use of -m, as nominative; 7) similar pronouns; and 8) similar ending formations:

The Chola came to India with a great knowledge of war strategy, charioteering, ship building and navigation.
The Chola are related to the Naga. This is evident in the story of the romance between the Chola and Naga princess. Srinivasan wrote “In both [legends] the son of their union came from Naagaloka in Paataal was a real country of Upper Nubia, the myths point to a connection of the Chola with Nubia. To realize some important points of similarities the Cholas and the great Napatan Kingdom of Nubia…”.

The royal title of the Cholas was Qore/Kora/Chora. Among the Tamils Chola is pronounced with a /r/. As a result, in Prakrit inscription Cholas is written as Soraa and Koraa. Srinivasan suggested that the Qore “Korites” of the Bible ( 1 Chronicles 26:1), may be the same people.
A coastal region of East India was called Coromandel / Koramandal ‘domain of Koraa” . Koraa is a dynastic name for the Cholas (See page 3).
The royal insignia of the Cholas was snakes. Twin serpents was a popular symbol of royalty among the Napatan Kings.

In summary the Telugu speakers belonged to the Tehenu and Nehesy tribes of Nubia, or Kush in the Nile Valley. The Telugu and Egyptian languages share many terms because the Chola came from Kaši or Kush, which was called Kušadvipa. They migrated into Anatolia and formed several city states including the Hurrian/Mitanni and Kassite states and were members of the Hatti Confederation.
The major Telugu state in India was Chola. In the Puranas the Chola were also called Kora/Chora /Qore. The Chola who came to India by land and sea settled on the Coromande coast. It takes it’s name from the word Koraa, one of the names for the Chola Dynasty.

Ancient Telugu continued in India to refer to themselves as Heqa Khasut or IkshvaaKuš. The royal insignia for the Chola were two snakes. The two snakes as a symbol of royalty goes back to the Napatan Kings of Kush (Nubia) who wore the Double Wadjet crown.
References:

Kalai Brief History About முத்தரையர்கள். Thanks