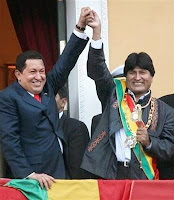 “The International Meeting of Left-wing Political Parties held in Caracas on November 19, 20 and 21, 2009, received the proposal made by Commander Hugo Chavez Frias to convoke the Fifth Socialist International as a space for socialist-oriented parties, movements and currents in which we can harmonise a common strategy for the struggle against imperialism, the overthrow of capitalism by socialism and solidarity-based economic integration of a new type. We assessed that proposition in terms of its historical dimension which calls for a new spirit of internationalism and agreed, for the purpose of achieving it in the short term, to create a Working Group comprised of those socialist parties, currents and social movements who endorse the initiative, to prepare an agenda which defines the objectives, contents and mechanisms of this global revolutionary body. We call for an initial constitutive event for April 2010 in the city of Caracas. Furthermore, those parties, socialist currents and social movements who have not expressed themselves on this matter can subject this proposal to the examination of their legitimate directive bodies.”

I want to take a few minutes to reflect on these issues, particularly to point to the importance that this call has […] In relation to the Fifth International I ask this special congress to include this issue in its debates so that we can analyse it and put it into context and study this proposal and its context. This proposal to call on political parties, revolutionary parties and social movements, to create a new organisation that is able to adapt to the time that we are living under and the situation that we live under; to put itself at the forefront of the people of the world and their calls; to become an instrument of articulation and unification of the struggles of the world’s peoples so that we can save this planet. It is important that the congress discuss this issue. That is why I made the call.

The Fifth International — let’s remember that the First International was established in 1864. Karl Marx with a number of other comrades called for the First International. Many years later Frederick Engels called for the establishment of the Second International at the end of the 19th century. And then at the beginning of the 20th century Vladimir Lenin with many other great revolutionaries established the Third International, and Leon Trotsky in 1936-37 established the Fourth International. All of them had a context but remember that all four Internationals, experiments to unite parties and currents and social movements from around the world, have lost their way along the road for different reasons — some degenerated, lost their force, disappeared soon after their formation. But none of them was able to advance the original aims that they had set themselves.

From the heat of great workers’ struggles and popular struggles against the so-called industrial revolutions and the dominance of the bourgeois class, many experiments where tried. Arising from the heat of the Russian Revolution, Europe was the epicentre of struggles. For many years many social movements and revolutionaries looked to Europe [...]

Now I think due to the product of the times we can say that the centre of gravity of revolutionary struggles on this planet is no longer in Europe … With much due respect to all the movements in Europe, Asia and Africa and the Middle East and Oceania and North America where revolutionary forces also exist, the epicentre of the revolutionary struggles and socialist struggle today in the world at the beginning of the 21st century is in our America. And Venezuela has the task of being the epicentre of that struggle. It is our turn to be in the vanguard and we need to take up that challenge. We have a great responsibility. All of you comrades, all of us in the PSUV and allied parties and us in government have that responsibility.